Strengthen the work of the prison system through a new administrative and interagency model is one of the objectives of the National Prison Reform Policy 2014-2024.

The policy was presented by Guatemala’s Interior Minister, Mauricio López Bonilla, in Guatemala de la Asunción (Guatemala City). It has been developed for ten years, and includes ten main strategic axes, forty general strategies and more than two hundred specific actions to address institutional issues among which are measures to improve the dignity of prison staff, internal and external security of prisons, inmates social reintegration and the promotion of social peace.

This video introduces the current situation of the penitentiary system in Guatemala. Maria Noel Rodriguez from UNODC and Pedro das Neves, from IPS_Innovative Prison Systems – a member of the team that developed the new policy – present an encouragement message that has been broadcasted at the opening of the public ceremony). 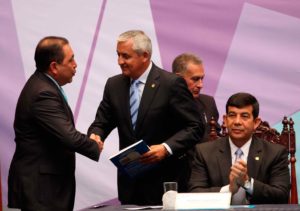 López Bonilla, thanked the civil society organizations who participated in the preparation of this document and urged them to continue to support each of the defined measures, as this is a strategy set to run in the current and in the next government administration. “This is a matter of state and not just an institutional matter as some people believe. What we are proposing today is light that should illuminate a profound reform to lay the foundations of a new penitentiary model. We must be optimistic, learn from the mistakes of the past and build hope for the future” he reinforced. Besides the formal presentation, the head of the ministry of the interior handed the new penitentiary policy to the President of the Republic of Guatemala, Otto Perez Molina.

The constitutional president acknowledged the work and commitment of the Minister of Interior and indicated that this is an important step representing an important contribution to the development of the Guatemalan society.

The Deputy Minister Edi Juárez Prera explained the process that led to the national policy reform of the prison system, confirming that the foreseen measures as sufficient to stabilize the situation in detention centers and significantly improve its performance.