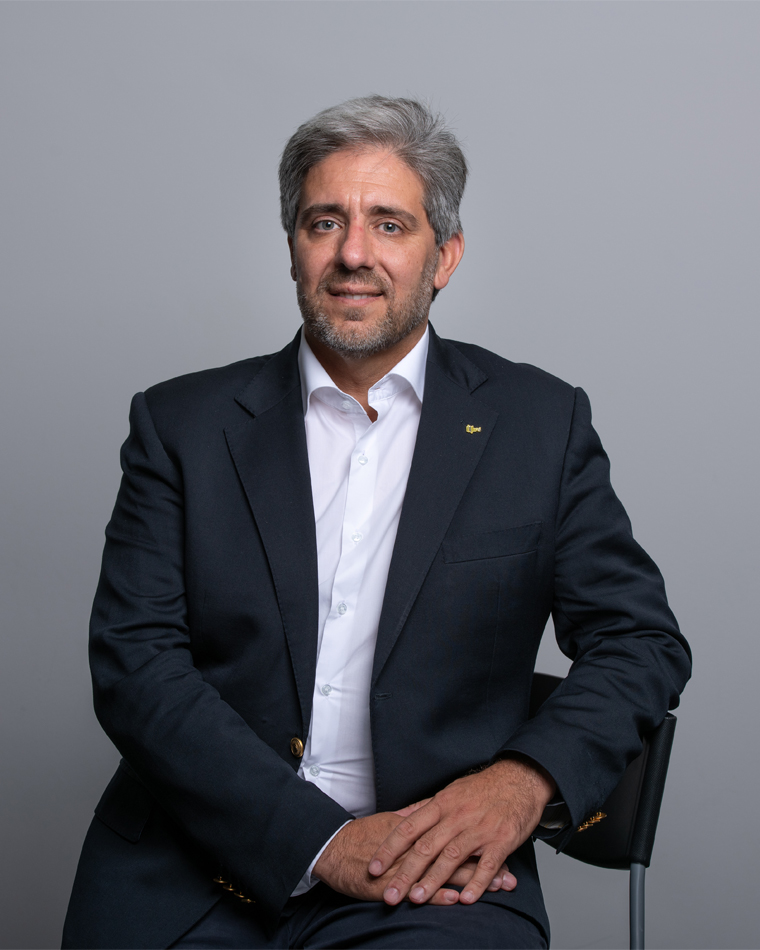 Pedro is the CEO of IPS_Innovative Prison Systems – a research and consulting firm specialised on justice and correctional Services – and executive director of ICJS Innovative Criminal Justice Systems Inc. – a firm incorporated in Canada, focusing on advisory, design, integration and delivery of innovative organisational and technology solutions for the criminal justice sector.

He has worked on public administration reform for 20 years, and on Criminal Justice Innovation Systems  in different countries.  Pedro is a board director of ICPA the International Prisons and Corrections Association; board member of the BSAFE LAB Law Enforcement, Justice and Public Safety Lab of Beira Interior University, chairing the non-profit EaSI the European association for Social Innovation; and the ethics and certification council of the Portuguese Association of Investment, Innovation, Technology and Management Professionals (ACONSULTIIP).

He is also advisory board member of the “Connecting Hearts Foundation for the Children of inmates” and founding member (and Ambassador in Canada) of the ALL4INTEGRITY NGO.

Pedro participated in multiple justice reform workgroups and was a member of a UNODC (United Nations Office on Drugs and Crime) team working on the feasibility of a global prison work brand. Over the last 2 decades, Pedro has been involved in the design and implementation of innovative pilot projects lately awarded and recognised as best practices.

In Latin America and the Caribbean, Pedro works with the InterAmerican Development Bank (BID) in several corrections and citizen security projects in countries such as Argentina, Brazil (Ceará, Espírito Santo, Federal, São Paulo, Santa Catarina, Rio Grande do Sul and Paraíba), El Salvador, Guyana, the Bahamas, Uruguay, among others.

He is the founder and editor of JUSTICE TRENDS, a magazine on innovation and best practices in prison and probation systems.

In 2017 he has was awarded with the “ICPA Correctional Excellence Award” and in 2021 was awarded the 2019 “Consultant of the Year” award by the Portuguese Association of Investment, Innovation, Technology and Management Professionals.

Has been invited as a guest observer to European Commission, Council of Europe and EUROPRIS meetings and as a speaker in several international events organised by the Council of Europe, EUROPRIS, ICPA (International Corrections and Prisons Association), EPEA (European Prison Education Association), COMJIB (Conference of Ministers of the Justice of the Ibero-American countries), the Inter-American Development Bank, the European Commission and governments from the different Member States.

Pedro holds a Sociology degree from UBI University and a MA from the College of Europe in Bruges, having as well other learning experiences in international universities.

Conferences and visits to Future Centers in the Netherlands hosted by Leif Edvinson, from Skandia Future Center.

Master of Arts in European Studies

Connecting Hearts Foundation for the Children of Inmates

Alternate Member of the Supervisory Board (pro-bono)

Member of the Board of Directors (pro bono)

ICPA was formed to operate as an Association for corrections and prison professionals, dedicated to improving global understanding and professionalism in the sector.

RUDE - Rural Development Association is responsible for managing the Community Initiative LEADER since 1992 at the Cova da Beira region (NUTIII). Since 2009 RUDE is responsible for the implementation of the PRODER (a strategic and financial support to rural development for the 2007-2013 programming period, approved by the European Commission Decision C (2007) 6159, December 4).

Chairman of the board (pro bono)

(as a result of the merger of GLOBAL CHANGE International Consultants S.A. within the I.Zone Group)

Consultant responsible for the evaluation of the impact of the Leonardo da Vinci Programme in National policies in Portugal and Spain in the period 1996-2000.

Ministry of Labour - Directorate General for Employment and Vocational Training

Model for Probation Services and Practitioners

Developing a European framework for disengagement and reintegration of extremist offenders and radicalised individuals in prison, including returning foreign terrorist fighters and their families

Visualising the Future Through Training

Systematic Transition from Prison into the Labour Market

Radicalisation and Violent Extremism Prevention in the Community

United Nations Office on Drugs and Crime, US State Department

Digitalisation in corrections towards reduced recidivism

Institutional Strengthening of the Probation Services of Guyana

Development of a Framework Document for Corrections Reform (Adults and Juveniles)

Technology Needs assessment and Plan for the Argentinian Penitentiary Service

Radicalisation risk assessment in the Balkans

Prison Officer of the 21st Century

Bringing Safety on the Roads

Public-Private Partnerships Programme of the State of São Paulo, Brazil

Partnership against violent radicalization in the cities

Coding in prison as a valuable OUTside tool for employment

Strengthening the capacity of criminal justice professionals and volunteers

Feasibility study on establishing a global brand of prison products

SNLP is financed by the Norwegian Grants (Innovation Norway Funding)

Reintegration of ex-offenders Community of Practice

Policies and strategies for Prison Management

As keynote speaker or presenter

Gaining and Edge over the Pandemic: the ICPA Global Taskforce on Covid-19 in Prions

6thCouncil of Europe Conference of Directors of Prison and Probation Services

COVID and the penitentiary institutions: the opportunity generated by chaos

Presentation (with a focus on correctional staff training)

Ministry of Justice, Constitutional and Religious Affairs of Mozambique and the UNODC United Nations Office on Drugs and Crime

Beyond the curve of the road Radicalisation prevention and prison intelligence

Innovative Approaches to the training of prison staff

Best practices on learning and teaching via virtual solutions

Approaches to the training of prison staff

Key issues in preventing radicalization to violence in prisons

Corrections in the light of digital transformation

The Right to Legal Aid in the Context of International Judicial Cooperation: Towards the Improvement of Equal Access to Justice for All?

Technological solutions: tools to connect with the outside world

Addressing challenges in the prison system during a public health crisis: Sharing experiences and lessons learned in LAC and the world in managing the COVID-19 pandemic

Reinventar a Gestão do Sistema Prisional

Intelligent and Sustainable Building for the 21st Century (courts and prisons)

Radicalisation, risk assessment and social work (In the Prison and Probation system) symposium. Bremen Justiz Senate, Permanent Representation of the Land of Bremen to the Federal Government

Digital transformation in prisons – the road ahead of the curve

Ministry of Community Safety and Correctional Services of Ontario, Canada

Modernization and Strengthening of the Penitentiary System of the State of Paraná, Brazil

Modernization and Strengthening of the Penitentiary System of the State of Espírito Santo, Brazil

Radicalisation in the Portuguese context - Prevention, Evaluation and Intervention Strategies

R2PRIS - A multi-level approach to deal with radicalisation prevention in prisons. Results from 3 years of development in Europe

Radicalisation Prevention in Prisons in Europe

Terrorism and Radicalism in Prisons

International high-level conference, organized by the Israel Prison Service in cooperation with the International Institute for Counterterrorism (ICT) in the framework of the World Counter-terrorism Summit

Policies and Interventions for radicalisation prevention in prisons

Radicalisation in Prisons in Europe.

Workshop on the Establishment of a global brand of prison products

Monitoring sex offenders in the Community

Training and Education of Foreign Inmates in Europe: perspectives on the use of technology enhanced learning

Towards and Integrated approach to Radicalisation Prevention in prisons and Community in Europe: the R2Pris transnational experience

User centered Facilities Management: FM at the center of security and individual rehabilitation

Congress of the Portuguese Association of Facilities Management

Pathways to Radicalisation and Recruitment: Intervention Strategies in the Balkans, Central and Southeastern Europe, University of Vest Timisoara and Romanian Centre for Prison Studies

Children in the criminal justice system: the responsibility of many, a priority of few

VII International Conference of Psychology and Psychiatry of Justice

Radicalization: a challenge to European Societies – the role of penitentiary systems

Open class in the framework of the R2PRIS Radicalization Prevention in prisons. Beira Interior University

Partners in Corrections: a world of possibilities

Improving the effectiveness of correctional policies in Latin America: the effective integration of people in conflict with the law

Unlock your potential with key competences

Trends in information and communication technologies for prison services: contributions for a Digital Roadmap

18th Council of Europe Conference of Directors of Prison Administration

5th Conference of the European Prison Regime Forum. Hosted by the Correctional Service of Norway Staff Academy and the Ministry of Justice and Public Security

Chairman of the Berlin Declaration panel

EuroPris Conference on Radicalization in Prison

Technology in Corrections: Challenges for the Future

Information and Communication Technologies in prisons

Council of Europe 21st Conference of Directors of Prison Administration

Organized by EuroPris – the European Organisation of Prison and Correctional Services

das Neves, P. (2019). The great doesn’t happen through impulse alone and is a succession of little things that are brought together. Editorial, Justice Trends Magazine (5). ISSN 2184-0113.